Talk about the mashup scene or anything you want. Section includes Lloyd Recommends and the Monthly Challenges
Post a reply
17 posts • Page 1 of 2 • 1, 2

Hello, hello, hello.
So, that's it... another year over and a new one just begun. 2013 turned out to be quite a good year but before we get into that, let's finish it off formally by taking a look at the best of December.

So sit back, relax and for the last time this year... Enjoy the best of Mashstix...

“The Best Of December"

DJ Schmolli - Stay The Night With The Police (The Police vs. Zedd & Hayley Williams)
OK so quite simple but so very wonderful!

Freddie Fustercluck - Spandex Feet, Alright? (Junior Senior vs. Mr. Scruff vs. Free)
Well this was a kick in the pants... Loved it!!

Kill_mR_DJ - Wicked (London Grammar vs. K. Minogue vs. Chris Isaak vs. Madonna)
This one speaks for itself... just soak it in.

Phil Retrospector - Jim Morricone (The Doors vs Ennio Morricone)
Everything we’ve come to know and love about Mr Retrospector all rolled up into a neat little ball.

RRodd - Get Down With Jazztin Bieber's Boyfriend (Come On Everybody) (Us3 vs. Justin Bieber)
So... Rrodd... what can I say about Rrodd... he took a while to find his voice, you always knew he had something to say but whether it was his choice of DAW or whatever it was his result just never quite fell into place how you expected... then in 2012 Bang!! He just started hitting them out of the park... He’s one to watch!! We’ll forgive him for using the Bieber just this once.

G3RSt - 2 Hearts In The Suburbs (K.Minogue vs Arcade Fire)
G3RSt has a remarkable ability to make the unlistenable listenable...

SpareElbowSkin - Psycho Killer On The News (Talking Heads vs. George Fenton)
This is an odd combo... the BBC News theme tune versus Talking Heads... took me a while to get my head around it... but you know what? It really works well.

MashMike - Love's Burn (Rudimental vs Ellie Goulding)
This is wonderful... sounds like a remix to me... great!

Athom - The Renaissance (Morcheeba vs. IAM)
I just love this vocal... reminds me so much of Sade... am I showing my age..??

DJ Schmolli - Smacking Up Papaoutai (Prodigy vs. Stromae)
And... well the perfect way to end the year... Our friend Ken.

So that's my selection of the best of MashStix December 2013, I hope you enjoyed it. If so, why not help promote the talented folks here at Stix by sharing this page on your social network of choice.
If you wish to download any of the tracks featured, just simply follow the link to the world famous "MashStix Front Page" by clicking Here!! and then type the Producers name into the search function at the top of the page...

Now then... Down to the real reason we're all here; The annual look back over the year and as i said at the start what a year it's been, especially for one of our members, who would have thought at the beginning of the year that Jimmy Page would have been posting a mashup on his website... Let me say that again Jimmy Page; the ultimate Rock God, at the start of the year posted a mashup on his website. It wasn't tucked away in a corner somewhere either, no it was centre stage.
That mashup then went on to become the soundtrack to the "Rock and Roll Hall Of Fame" promotional video... Of all the music they could have chosen they chose a mashup! You gotta show those guys some love!!
The mashup in question and the producer... The one the only... Fissunix - Whole Lotta Sex Machine
Take a look if you don't believe us... http://www.rockhall.com/visit-the-museum/plan/

2013 also saw another of our members go stratospheric... Just check out the play count on this bad boy!!

If you didn't see it with your own eyes you'd think we'd made it up wouldn't you... This boot just went insane it was everywhere, people in the media commenting on it... people you wouldn't think would care were having their say about it... I'm surprised it wasn't mention in Congress... I believe poor old Pom and the Nine Inch Nails boys almost came to fistycuffs but it all ended amicably when Pom told them to "Do one!!"

As for Mashstix, well I think it's safe to say now that we have firmly cemented ourselves not only as the heart of the mashup scene but I think now we can honestly boast that we are the number one mashup site on this thing we call the t'internet.
For that we must say a huge thank you to our members, our team of moderators, our fans and follower and the sites we like to think of as our brothers and sisters;
The wonderful Bootie - http://bootiemashup.com/blog/ Bringing mashups to the world for a decade now and still growing.
Mashup Your Bootz - http://mashupyourbootz.blogspot.co.uk/ Their monthly party samplers are a must have.
Audio Porn Central... Or as they call themselves now http://moarrr.com/ Less a music site, more a way of life.
I think it wouldn't be wrong to say that between the four of us we've managed to stay true to the roots of the mashup scene whilst letting the creative art evolve... But we won't stand for any of your EDM vs EDM crap!!

So anyway... I asked at the beginning of the month for members, fans and followers to send me their nominations in three categories; Favourite Producer, Favourite New Producer and Favourite Mashup, I think it's about time I told you the winners...

I don't think it would come as a surprise to anyone to see Schmolli sitting at the top of the heap with over 40% of the vote but what I'm really very pleased to see is who came 2nd and 3rd, very well done chaps!!!

again this really pleases me... especially as both of these guys have recently become moderators here, it's good to know we are chosing the right guys for the job. To be honest from the very start of nominations it was apparent that this was turning into a two horse race these guys were so far out in front and finished with such a close number of votes that it would be unfair to say which one actually won... so I didn't and won't... Congratulations to you both!!

Honestly did you think it wouldn't be Pom..??

A huge congratulations to all the winners... but you know there are no losers this year, everyone has been tremendous, so much so that in our "Best Of Mashstix" end of year mix I couldn't fit everyone who deserved to be in it, in it. So I'd like if you'll allow me to mention a few tracks that didn't make it that I've really liked this year.

Firstly a couple of absolutely beautiful tracks from Dylan Vasey

Next up we have a track that to be honest; I'm still not sure what it is... but I loved it, so soothing... just bliss!

OK so this one is in my best of December (just up there... you've just played it!) I wish it had come out sooner in the year, I think next year's "best of" should run from December - end of November because this deserves a place. It's the wonderful;

Colatron!! what can I say about my friend CLT..?? well i think he purposely makes unmixable tracks

i could have chosen any but I think this was actually my favourite this year... ...to listen to the rest follow this link http://www.mashstix.com/music-mashups-by-colatron

DeeM.... oh DeeM DeeM DeeM... Why is your ego so big..?? I shouldn't judge music by the producer behind it, I know that but sometimes it's hard not to. Anyway DeeM you made two of the most played mashups on my Iphone this year, they are both very beautiful.

So I don't usually do this but would you like to know what was the most played mashup on my iphone this year..?? It's probably not what you'd think it was at all... But the track that put the biggest smile on my face, wasn't by the living legend that is Schmolli, it wasn't a Dan Mei track nor was it a Fissunix or a Lobsterdust. It wasn't even a MadMixMustang... nope the winner of my own personal best of 2013 was this... Love it!!

The Best Of Mashstix.com 2013 Mixed By Lloyd 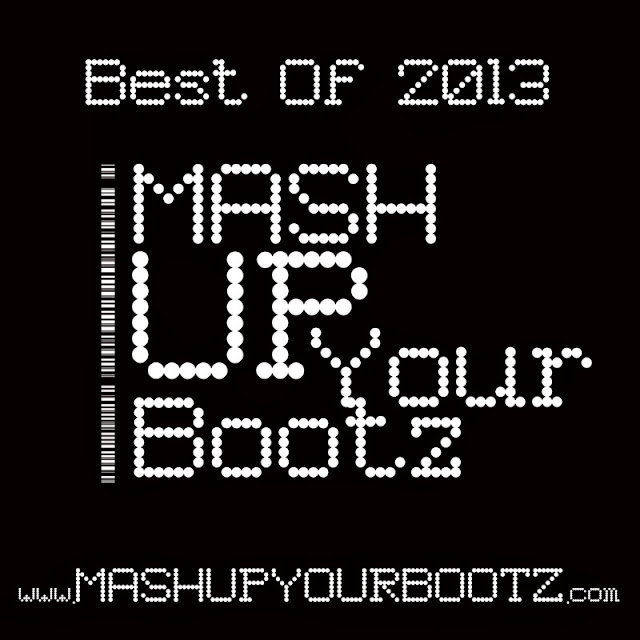 This post is dedicated to the memory of Grant Martin and Jells Mayhem, may they rest in peace.

It's been one heck of a year for me on the mashup front. What started out as curiosity about CD burning software has definitely grown into something much, much bigger than that. In 2014, I look forward to showing you all that you weren't wrong to give me this honour.

Thanks for everything, folks.

*Go figure...both of our producer names start with "Sh" and we end up in a dead heat. Conspiracy!!!
Former Deputy Commissioner, Mashstix Harmony Police
Facebook
Top

Wow! Thanks guys, and thanks lloyd for The title :) it was amazing mashups year.
can't say about me, but Sherlock definitely deserved it

about the conspiracy-be quiet, shhhhhh...

congrats to the winners!
i learned alot from this awesome community this year, and it was perfect mashup school. and i still learn every day.
wish u all happy new year!

I'm not sure why that joke of a mashup "Blurred Bartman" managed to scrape into the third place spot, but I guess there's no accounting for people's taste!

Thank you to all the twisted souls that voted for it, and congrats to all the other completely deserving winners!
Facebook
SoundCloud
hearthis.at
Top

Second i wanna thanks all Moderators and Member of Mashstix for the advices they have given to me .
Congrats to all other Members who had make it to Lloyd's best of and finally congrats to DJ Schmolli , Kill_mR_DJ ,
Lizzart ,Sherlock Poirot , Shahar Varshal , pomDeter and SpareElbowSkin for the elections they have won

Thanx everybody for your support, much appreciated. Time to retire and make room for the newbies.

Thanks for the inclusion! A nice motivation to start into 2014!

DJ Schmolli wrote: Time to retire and make room for the newbies.

Man, this is sssso coooool!!!
2nd? Right after boss Schmoll? One of my most influential bootleg teachers?
Wow! Guys, this is a huge honor! A HUGE HONOR!!!
Thank you BIG TIME!
Wow, I'm moved, this is not happening

2013 was my most super-shitty year in personal life ever! fail, nothing but fail, just fail, all fail
but my mashie life was AMMMAZING!
Maybe I should reconsider now, that things are going well again?

ps: also very happy for the rest of the guys, but especially for Shahar, who was my most played producer in my playlists!
some uber TOP tracks!!!

Users browsing this forum: No registered users and 8 guests